“Music and love are the wings of the soul.” 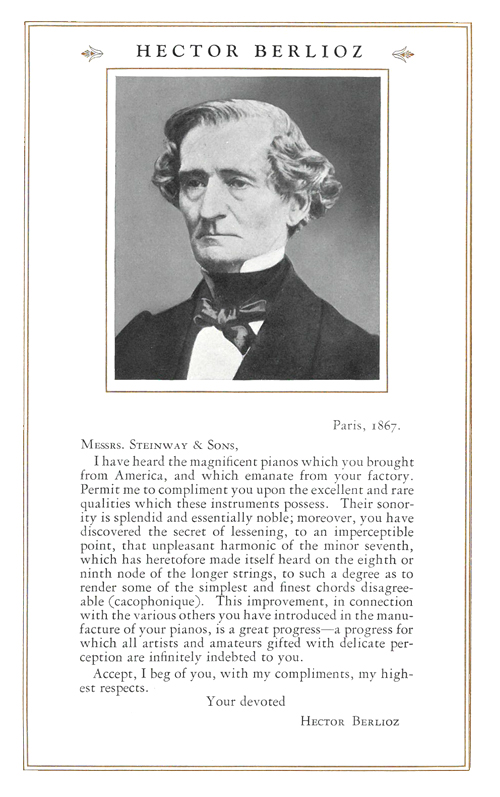 Hector Berlioz (1803–69) was known for multiple things: being a grandly ambitious composer of operas and orchestral works, as well as a noted conductor; but also for serving as an acute critic and chronicler in periodicals, a writer whose collections Mémoires and Les soirées de l’orchestre still offer an enlightening, entertaining window into the Romantic age. Berlioz was not known as a pianist, though, or as a composer for the instrument. Yet, having experienced a Steinway at the Paris Exhibition of 1867, the composer became a great friend to the company as it was trying to make inroads into the European market. As a virtuoso orchestrator — one of his enduring works is Symphonie fantastique, and he penned an influential treatise on instrumentation — Berlioz had a keen appreciation of the Steinway’s virtually orchestral sonority; he called the instruments “magnificent,” writing about their “beautiful and rare qualities” and “noble” tone.

For his theatrical Romanticism and richly modern sense of orchestration, Berlioz was a key inspiration across multiple generations of European composers, from Wagner and Liszt to Tchaikovsky and Rimsky-Korsakov to Richard Strauss and Mahler. Berlioz’s grand opera Les Troyens prefigured Wagner’s epic music dramas, while such hybrid vocal-orchestral scores as Le damnation de Faust and Roméo et Juliette hint at Mahler’s similar works. Other enduring Berlioz works are the programmatic viola concerto Harold en Italie and the Grande messe des morts and Grande symphonie funèbre et triomphale, as well as his monumental Te Deum. His operas also include the heroic Benvenuto Cellini and comic Béatrice et Bénédict. Performed more often are his various concert overtures and his touching song cycle for piano and voice, Les nuits d'été, which he later orchestrated. As a pioneer and avant-gardist, Berlioz wasn’t rewarded substantially during his lifetime, though his music is heard across the globe now and his bon mots live on, too. One of which: “Time is a great teacher; but unfortunately, it kills all its pupils.” —Bradley Bambarger